Milan’s Ensemble Divertimento ranks as one of Italy’s premier new music institutions, having developed close connections to the city’s composers and beyond over an impressive 41-year lifespan. Yesterday evening, I attended a concert that displayed a distinctive feature of the ensemble’s work, its commitment to bringing new music to a broader audience.

The central work on yesterday’s programme was Gabriele Manca’s Lettres comme á l’envers (‘Like letters in reverse’), a new composition for soprano, ensemble and amateur choir based on a text by Algerian writer Rachid Boudjedra. Founded last year, the choir in question were the ‘New Voices of the Divertimento Ensemble’, roughly 40 singers with little to no musical training. While some of them had previously attended Divertimento concerts, many were new to the field of contemporary music, hearing about the project through local media and word of mouth. I chatted to a few members at their Monday night rehearsal, all of whom had found performing a new work challenging but very rewarding. The group seemed to have built a close-knit community around this music, an inspiring result.

The work itself took up the theme of migration, not with a positive message of inclusivity, but rather through a poignant exploration of disorientation, displacement and host nation hostility. Manca dedicated the work ‘to all those women, men and children who after endless wanderings reach only our distance’. This feeling of conflict and confusion was subtly translated into sound. Manca’s opening passage carried a strong sense of agitation via nervous key-clacking in the woodwind and a rumbling chant performed by the male voices. A persistent whining accordion note added further tension (and appropriately, some noticeable confusion for the audience over where it was coming from). In a later section, shrieks and squeals from the soprano (Beatrice Binda, who also performed a solo work by Manca earlier in the evening) gathered into a eruption of angry responses from the full choir: a brutal, effective climax. 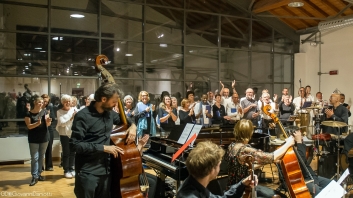